Distribution of value created by TITAN Group in 2011

Total value created in 2011 was €1026.6 million and distributed to key stakeholders as follows:

TITAN Usje continued in 2011 its “Partnering with Schools” project, which was launched in 2010 and covers nine primary schools and one kindergarten in the area.

Each school was asked to identify its own priorities and needs to be accommodated by TITAN within the project areas, namely safety and the environment. Having received priority lists from all the schools, the “Partnering with Schools” project team grouped the needs and priorities under a common Action Plan. Almost all schools needed new fences or some repairs to the existing ones. Others needed new playgrounds, new washrooms and toilets or repairs and replacements in their electric or hydraulic infrastructure. The work in all schools was completed within 2011. 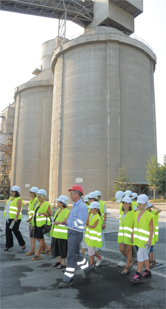