In 2011, the electrical energy consumption by the Group cement production plants, attached and related quarries was 1,437 GWh or 5,174 TJ (5,173 TJ by the cement plants and their attached quarries and 1 TJ by four related quarries). As in the case of thermal energy consumption, the observed decrease of almost 12% - compared to last year - is a result of the decrease of the volume of production. Moreover, improvements in the operating efficiency of the Group’s facilities were also a contributing factor. The average specific consumption being decreased by almost 2% compared to the previous year, to 111.1 kWh/ton cement. Compared to 2003 level, the decrease is equal to 6%, which corresponds to an equivalent of 3,45 TJ based on the 2011 cement production.

The installation of advanced equipment, like low energy vertical roller mills or motors with inverters, made possible the reduction of the electrical consumption.  As in the case of thermal energy, frequent inspections of the equipment by the plant engineers as well as performance audits by the corporate group engineers sustain TITAN’s focus on operational advance. 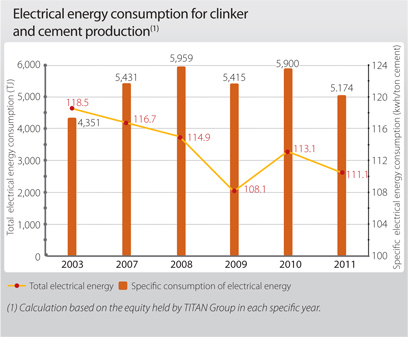