Direct CO2 emissions, from the production of cement itself, are attributed to:

The Group’s main objective is to reduce its carbon footprint from the level of 1990 emissions. Serving this objective, an initial Group target of 15% reduction compared to the 1990 emissions level was set back in 2006, to be achieved by the end of 2010. The target was revisited in 2010 and a more aggressive one was set for the period 2010-2015. The current goal is to achieve an overall reduction of 22% from 1990 levels. 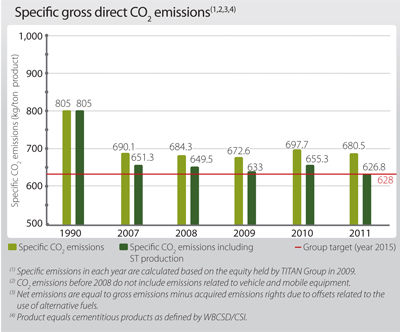 In line with Group CSR and Sustainability policy, in 2010 TITAN expanded the scope of key performance indicators measuring its carbon footprint, so as to include ST production in Group performance.

During 2011, total direct CO2 emissions from cement and grinding plants were 8.6 million tons. In 2011, CO2 specific emissions, including ST production, were further reduced by 4.4%, achieving the target set with an overall reduction of 22.1% since 1990. Even if ST production is not taken into account, the Group’s carbon footprint was reduced by 2.5% to that of 2010 or 15.5% compared to the base year.

It should be noted that in 2011 specific CO2 emissions that include ST production were recalculated to account for the amount of Pro AshTM produced, not the amount sold.