Building a Health and Safety culture

Wages and benefits
Guarantee a wage that – at a minimum – meets national legal standards and additional benefits responding to the needs of the majority and local priorities.

Forced labor
Prohibit any type of forced or bonded labor.

Freedom of association
Respect the right of people
to form and join associations
and to bargain collectively.

A systematic approach is followed by TITAN at Group level, guided by the Group Health and Safety Council, which is chaired by the CEO and attended by the Chair of TITAN’s Board of Directors. The Council meets three to four times each year and is constantly reviewing safety performance against set targets and seeking further advancement of best practices in all TITAN operations.

TITAN is focused on continuously impro­ving the leading rather than the lagging Key Health and Safety Performance Indicators. Reporting and thoroughly investigating all accidents and near misses, training the Group’s as well as its contractors’ employees, encouraging everyone’s participation in assessing the risk of the jobs he/she is involved in and active participation of line people in site safety committees: these are some of the preventive measures TITAN is taking in its daily business life.

In 2011, 1,888 near misses were reported by TITAN’s own and contractor employees, compared to 1,475 in 2010, with 96% of them being fully investigated. The lessons learned were disseminated to the whole group and more than 2,200 corrective actions were taken as a result of the near misses investigation.

Safety training for both direct and indirect employees after reaching a peak of 106,794 hours in 2010, was reduced to 61,918 man-hours mainly owing to the rightsizing of the workforce in most of the Group sites and the completion of the big projects.

Regarding driving and contractor management, TITAN is on the right track regarding its compliance with the relevant CSI guidelines, having already completed more than 70% of the procedures. Complying with the CSI guidelines is not enough for TITAN, since these two factors are among the greatest hazards encountered in its operations. The TITAN Group has set the bar very high and is consciously pursuing excellence in this field.

For a third consecutive year, two of TITAN’s cement plants have received awards for their excellent safety performance. The plant in Thessaloniki, Greece, has been recognized for its safety performance and the plant in Zlatna Panega, Bulgaria, for its safety initiatives and continuous improvement. The plants in Beni Suef and Alexandria in Egypt have been recognized for their pursuit of safety excellence, despite working at full capacity under adverse social and political conditions.

The endeavor to continuously improve the Group’s performance has involved the “360o safety reviews” which have already been completed once for all cement plants. From now on, a new tool has been developed and its implementation started, so that in addition to identifying risks, a step further is taken towards managing them.

As far as the lagging indicators are concerned, both the number of Lost Time Injury (LTI) and the Lost Time Injury Frequency Rate (LTIFR) of the Group’s employees have been improved, compared to last year, by 38% and 36% respectively. Compared to 2005 the improvement is 78% for the number of LTIs and 75% for the LTIFR rate. Both the LTIs and the LTIFR for 2011 are the best ever achieved in the company. 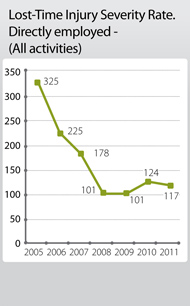 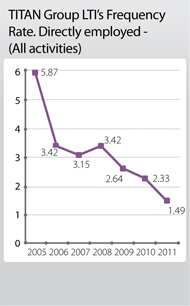 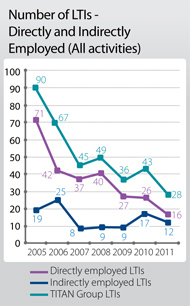