In 2011 the TITAN Group consumed 36,562 TJ (36,559 TJ by the cement plants and their attached quarries and 3 TJ by four related quarries), in the form of thermal energy, in its clinker and cement production process. The observed decrease in total thermal energy consumption, almost 14.8% compared to last year, is a result of a similar decrease in the volume of production as a result of the specific conditions in the markets. The corresponding specific consumption remained at the same level as in 2010, coming to 3,513 MJ/ton clinker.

Compared to 2003, however, specific consumption showed a significant reduction of 12.1%. This reduction, which at 2011 production level is equivalent to about 5,000 TJ, is a result of substantial investments in state-of-the-art efficient equipment not only during the design of new cement plants but also during the retrofit of existing plants. In addition, improvements in the day-to-day operations through the implementation of best practices and experiences further provide for efficiency improvement. The largest source of thermal energy (98.5% calorific basis) came from conventional energy sources, such as coal, pet-coke, fuel oil and natural gas. Alternative fuels make up the remainder. 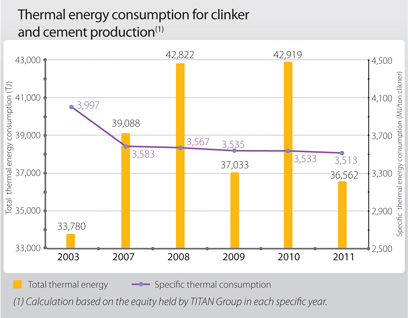 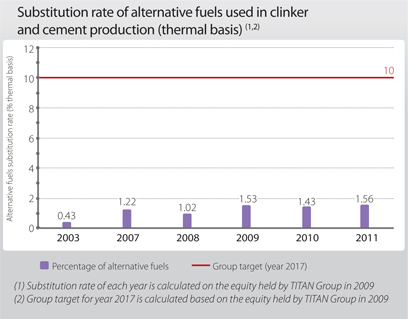