In 2011, total emitted dust was 1,601 tons while specific emissions were 159.2 g/ton clinker, based on 2009 equity held. At all facilities continuous efforts are made to ensure that dust emissions respect the limits set by the environmental terms of their operating permits as well as specific conditions set by the local authorities.

Specific dust emissions were increased compared to 2010. This was a result of the decrease in production in all countries, apart from the few where local plants still operate with electrostatic filters that are less effective than bag or hybrid filters. Despite specific dust emissions being increased by 3.7% compared to 2010, in relation to 2003 a 57% reduction has been achieved at Group level.

The main sources of dust are smokestacks, where emissions can be controlled with filters. Fugitive dust, which is also generated by materials transportation, is measured regularly and controlled using specific measures such as paving and spraying, covering vehicles, etc. 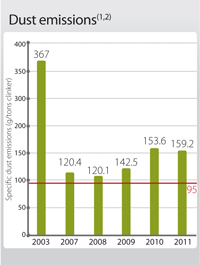 Group performance in 2011 was improved compared to last year as a result of further improvements achieved at plant level. Specific NOx emissions recorded further improvement during 2011, close to the Group target. Year-to-year reduction was about 8%, while cumulative reduction in respect to 2003 came to a significant 44%.

In the last few years, TITAN has invested heavily in technologies that can reduce NOx emissions, like SNCR systems and low NOx burners, and will continue to follow this path in the future. In 2011, NOx emissions were 17,152 tons while specific emissions were 1,706 g/ton clinker, based on 2009 equity held. As with dust, we are working tirelessly so as emissions are within the limits stipulated in the environmental terms of the opera­ting permits.

The presence of sulphur (S) in raw materials is the primary cause of SOx emissions which are directly linked with the appearance of acid rain. It is therefore vital to keep these emissions as low as possible.

For yet another year, at many Group plants, SOx emissions were negligible while in all cases they are far lower than those allowed in the environmental terms of the opera­ting permits. In 2011, SOx emissions were 2,433 tons while specific emissions were 241.9 g/ton clinker, based on 2009 equity held. Compared to 2010, specific SOx emissions increased by 14.5%, ending above - yet close to – the Group target. Overall performance since 2003 was improved by a staggering 51%. It should be noted that total emitted quantity was reduced. 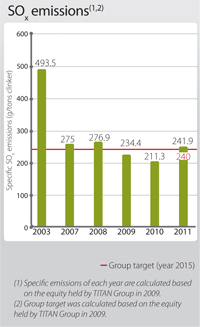