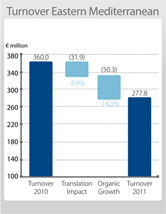 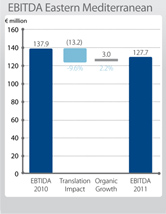 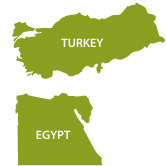 The Eastern Mediterranean region remained the strongest contributor to Group’s profitability in 2011. Consequences of the political uncertainty that prevailed in Egypt were partly offset by the growth of the Turkish economy, which  has led to higher demand in the construction sector.

Group turnover in the region contracted by 23% to €278 million, a decline partly attributable to the appreciation of the Euro against the Egyptian Pound and the Turkish Lira. EBITDA declined by 7% to €128 million, despite the inclusion of €26 million relating to the refund of the clay tax fee in Egypt.

Following the political unrest of the Arab spring, in 2011, new issues have arisen relating to the privatization of the formerly state-owned heavy industries like cement production, which took place more than ten years ago.

Environmental activities at APCC (Alexandria cement plant, Egypt)
An ambitious environmental initiative for the residential area close to the Alexandria plant was launched in June 2011, on the occasion of  World Environment Day.