Cement production is energy demanding. To conserve limited natural resources, the use of alternative fuels, especially those of high biomass content, became a major part of the Group’s sustainability strategy.

In 2011, total renewable energy came to around 550 TJ compared to almost 36,000 TJ of non-renewable energy. As percentage of the overall thermal energy consumption, alternative fuels consumption was increased from 1.43% in 2010 to 1.5%. This is a result of a further increase of alternative fuels use in plants that are already using such fuels. Although efforts to develop appropriate infrastructure and acquire permits according to national and international standards have been met successfully, TITAN’s performance is lagging, not only to that of its peers, but also to the Group target set for 2017.

In the last two years, cautious but ambition plans were prepared and put into action. They covered all aspects of alternative fuel usage, including engagement of stakeholders, obtaining the necessary licenses, market studies to source suitable fuel streams, as well as acquiring state-of-the art equipment that will increase alternative fuels use substantially.

Investments on new/upgraded facilities for handling, storing and feeding alternative fuels were made at Kamari and Thes­saloniki cement plants in Greece as well as at Zlatna Panega cement plant in Bulgaria (for more details please see p.48). At Thessaloniki plant this effort has been paused for the moment to avail further dialogue, consultation and engagement with key stakeholders. 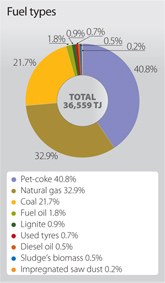