Also related to ISO 26000 CSR principles and particularly the following:

Throughout its history, TITAN has been guided by certain values. Putting these corporate values into practice is a task in which all TITAN employees can make a difference. Commitment to applying the highest standards of corporate governance has been underlined by the decision of the TITAN Board of Directors to comply – over and above the provisions of Greek Law - with the U.K. Code on Corporate Governance, as revised by the U.K. Financial Council (June, 2010).

Since 2000, corporate social responsibility and sustainable development have been embedded step-by-step in the governance and management of TITAN operations. Meeting business objectives, both in the short and long-term, is regarded as a shared responsibility among all TITAN Directors and managers.

First adopted in 2004, the TITAN Group Code of Conduct (like the Code for Procurement of 2008) sets out the principles of conduct that each individual is expected to follow. The Group Internal Auditing Department reports annually to the Board of Directors the outcomes of internal audits including incidents of non-compliance with Group standards and principles.

In 2011, a revised draft of the Group Code of Conduct was presented to the management team and selected external stakeholders. Feedback received was incorporated to the final draft. The new Code of Conduct is expected to be fully launched in 2012 with a new communication and training plan.

TITAN Group CSR Committee is the Board Committee appointed to shape and guide TITAN’s CSR strategy and sustainability agenda. The Committee is chaired by the CEO and includes two other Board Members and three Members of the Executive Committee. It meets three to four times each year to review all aspects of TITAN’s CSR policy and agenda for action. CSR is a shared responsibility for the TITAN Group, both top- down and bottom-up. 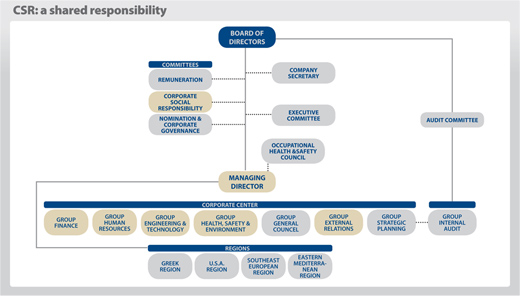