Understanding the Industry and our Footprint

Home > Understanding the Industry and our Footprint > Business Activity by Segment

Cement is a substance with the ability to harden upon contact with water (hydration reaction). It is made by grinding clinker, gypsum and/or other cementitious materials into a fine powder. This fine powder consists of hydraulic calcium silicates and aluminates that when mixed with mineral aggregates (like sand, gravel or crushed stone) and water, act as the binding agent to form concrete.

TITAN produces Portland cement, masonry cement and other cementitious materials, such as processed fly ash. Through extensive R&D the Group is able to offer various types of blended cements for specific applications.

Concrete is produced by mixing cement, water, and aggregates. One cubic meter of concrete mixture contains approximately 300 kg of cement, 150 liters of water and 2 tons of aggregates. Depending on the admixture formula selected, the concrete produced has different properties aimed to address the Group’s customers’ diverse needs.

Aggregates include crushed stone, gravel and sand. Aggregates differ in their physical, mechanical and chemical properties, granularity and hardness. The main use of aggregates is the manufacture of concrete or concrete products, like building blocks. Other applications include the construction of roads, railway tracks etc. 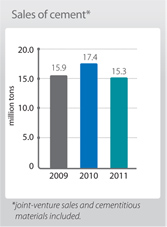 In 2011 sales of cement, clinker and cementitious materials declined by 12% to 15.3 million tons.

The sharp decline of construction activity in Greece and the social upheaval in the countries of North Africa which prevented exports, had a strong impact on Group cement volumes. South Eastern Europe and Turkey posted growth, while the U.S.A. remained in recession for yet another year and the market declined in Egypt. 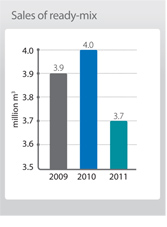 Ready-mix concrete posted strong growth in the emerging markets and also increased in the U.S.A. Growth in these regions offset to a large degree the decline of volumes in Greece. 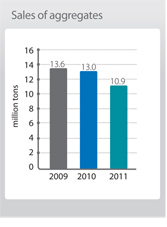 Sales of aggregates declined by 16% compared to the previous year, reaching  10.9 million tons in 2011.

The decline comes as a result of the dramatic fall of demand for building materials in Greece, cushioned partially by growth initiatives in new applications in the U.S.A. market.